The practice of yoga nidra is increasingly becoming more popular and valuable, especially given the present state of the world, as it can create an oasis from which we may drink to replenish the human consciousness – from a place of deep relaxation.
Yoga Nidra is often described as “psychic sleep” or “yogic sleep”, but it is so much more than that. Though it was popularised and disseminated extensively by Swami Satyananda Saraswati and later Swami Rama and others.. it has it’s roots in ancient Tantric practices like Nyasa – which literally means to ‘locate divinity within one’s own body’.
‘Nidrā’ translates to sleep but it can also be read as ‘Ni- the void, and ‘dru’ – to reveal. The concept of the void which has been the subject to endless texts, works and literature by mystics, spiritualists, poets, artists and philosophers. The practice guides us towards this void, which is said to be empty and full at the same time. One can draw from it and bring the qualities of creativity, peace, harmony and stillness into our lives or one can surrender to it without fear, and there, find liberation by knowing one’s true Nature – the true purpose of the spiritual path. A real journey back to the womb, which is not separate from the Heart.

It is mentioned in texts like The Devi Mahatmya 5th-6th Century, Hatha Yoga Pradipika – 15th Century, Yoga Taravali – 14th Century. In the Mandukya Upanishad, one finds descriptions about the three states of mind – waking, dreaming, sleeping and the fourth state known as Turiya. One voyages through these states during the practice but while there is mention of yoga nidra, there is actually very little documentation of the actual details of the practice itself.

The reason for this can be attributed to the ancient and mostly oral Indian system of imparting knowledge – Gurukul, where knowledge is only revealed to the student who is ready to receive, and once imparted, is put to practice, not talked about. Knowledge was often closely guarded to protect both the subject from falling into incapable hands as well as for protecting the student from erroneous practice. I think this highlights the difference between the occidental and the oriental mind, I use the terms occidental and oriental for convenience but to be clear, both types of minds exist in both the cultures. It is not dictated by geographical location but is an approach to life. The latter is more patient and comfortable with ambiguity and not knowing and values discovery. Most eastern wisdom and knowledge systems can only truly be accessed through emphasis on embodiment and experience, not simply through discussion and debate.

I myself am not a certified teacher of yoga nidra, neither do I believe that it is something that can be learnt through a teacher training certification, as with meditation or a complete practice of yoga. The practice is the teacher, these teachings reveal themselves slowly and with consistent practice. As such, a teacher must commit to being a lifelong student.
Yoga Nidra is a technique that can lead us into deep relaxation yes, but more than that it is a state of consciousness which cannot be reached without divine grace.
Since I guided my first savasana in 2009, I felt that there was ‘something’ there. Though I didn’t work from any prepared script, words flowed out of me and guided the students to places that I wasn’t quite sure I knew myself. Ihad a sense of being perfectly aligned and truly in my element in those moments. Since then I have read, researched and practiced.. and found my teachers in my hatha yoga practice, pranayama, meditation and in nature; all of which come back to inform my yoga nidra practice and teaching.

Since I returned to India from Spain, I have been tracing back and establishing myself in my roots. I come from Assam, a state in northeastern India where Shaktism is very present and I follow a lineage of Shakti worshippers through both my paternal and maternal grandmothers and great grandmothers. As I assumed my place on this Goddess path, I found my practices taking on new layers of meaning and understanding. It was therefore very interesting for me to find Yoganidra mentioned in the Devi Mahatmya as an aspect of The Divine Mother – Yoganidra the Goddess of sleep who engulfs the preserver – Lord Vishnu in deep repose between the cosmic cycles of creation and destruction. She is the aspect of The Divine Mother without whose grace, even the Gods cannot function, without whose grace nobody can ‘awaken’ either.

The Devi Suktam in its praise of the Divine Mother sings of this very attribute:

—- We bow to the Divine Mother who exists in all beings as sleep,
We bow to Her, we bow to Her and we continually bow to Her.

I find it a beautiful ritual to invoke The Mother (in her Universal form as well as our feminine bloodlines – those who came before us) before journeying into the practice of yoga nidra so that we may be guided into a deep rest that peels away the layers of ‘unknowing’ and awakens us to our true essence and potential.
The practice of yoga nidra connects us to the universal energy of the Divine Mother through the especially feminine aspects of nurturing, support, rejuvenation, receptivity and surrender. While one might argue much of these these can be achieved through meditation too.. the beauty of Yoga nidra, which is a complete system on its own is that it is soft and forgiving and can be practiced by anybody, irrespective of whether they can sit in a meditative posture or have a practice or not. It is a space of “softness” with moon like attributes, which, in the very least, brings rest that every being in this universe deserves.
As with many of the subtle practices, one starts with techniques and specifications, but as one progresses and deepens the practice, all techniques are dropped to surrender to flow and the ‘state’ is assumed effortlessly and spontaneously.

By Her grace, I hope we will all reach there someday.

Drawing as an exercise to realign to the self. 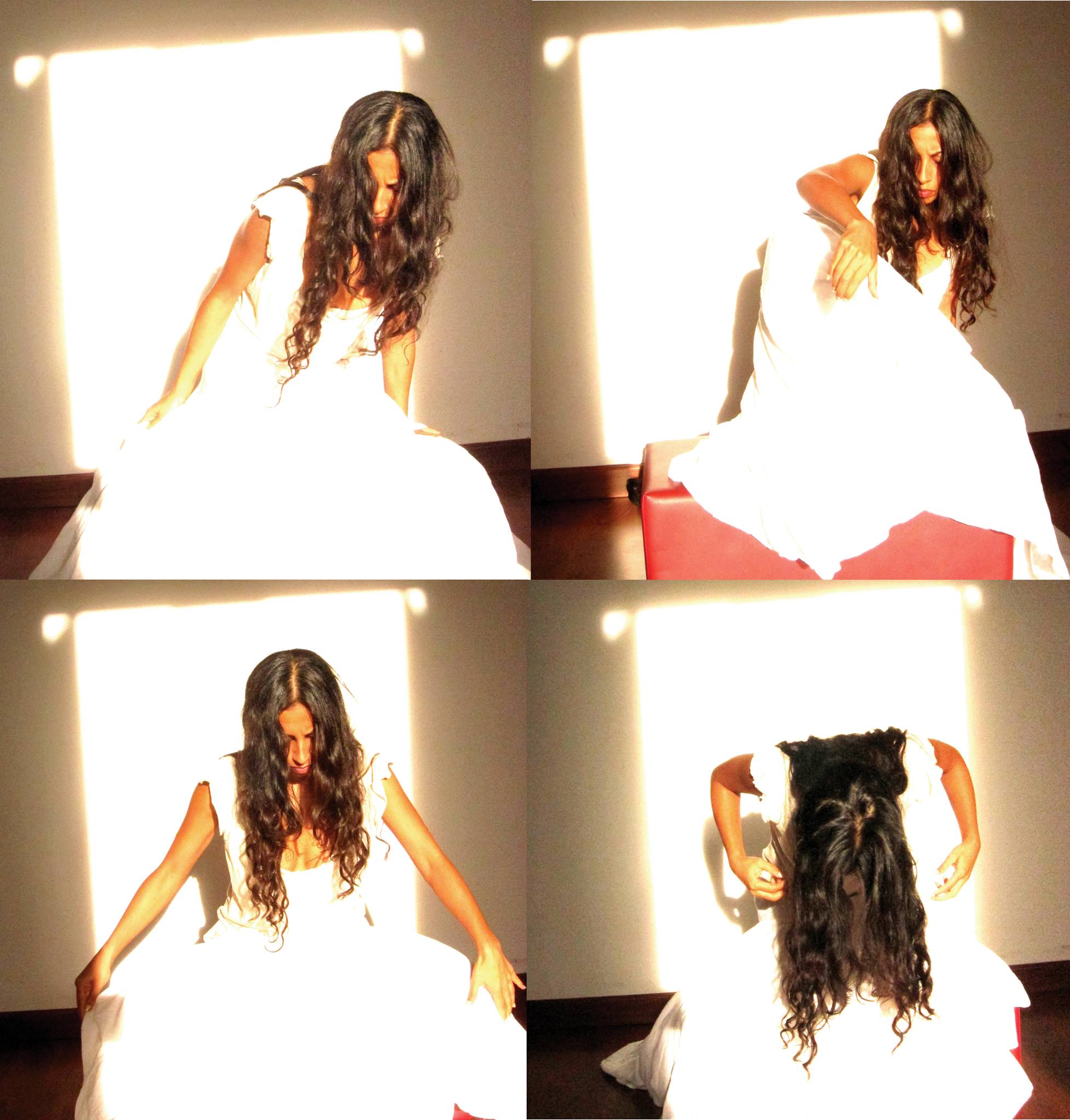 For years, we lived in her majestic presence.

Gracefully she would sway in the breeze and allow secrets to ripple through her hair, making music as through a harp.

She listened quietly to our dreams as we stared at the sunlight streaming through.

And when the storms came, she stood strong and bravely took on the lashes from the forces. The next morning she would stand bruised but tall, and so she reminded us of the inevitable ways of nature.. having faced the onslaught so courageously, she emerged more beautiful still.

When disease came over her, she did not complain, having stood all her life, she gently lay down one fine day, to her final rest.
Leaving behind a mark and many quiet lessons in our lives, that would remain forever.

Returning to the Womb with Yoga Nidra

The practice of yoga nidra is increasingly becoming more popular and valuable, especially given the present state of the world, as it can create an oasis from which we may drink to replenish the human consciousness – from a place of deep relaxation.Yoga Nidra is often described as “psychic sleep” or “yogic sleep”, but it […]

The concept of Brahmacharya.

This post will make sense to those of you who have some insight into Yoga Philosophy.Brahmacharya often translated as celibacy is one of the yamas(or observances/ code of conduct) of Patanjali’s Ashtanga or 8 limbed path of Yoga. Simply saying celibacy however doesn’t seem to do justice to what is being conveyed through the concept […]

Drawing as performance.
Drawing is an action.
On repetition, it creates a doorway to
transcendental spaces.

Drawing as an exercise to realign to the self.

For years, we lived in her majestic presence. Gracefully she would sway in the breeze and allow secrets to ripple through her hair, making music as through a harp. She listened quietly to our dreams as we stared at the sunlight streaming through. And when the storms came, she stood strong and bravely took on […]

In the whole act of creation, the process; from the first conception to the final birth is where the art is. The process, when lived with full awareness has a breath taking beauty.  An active participation with a state of full absorption to the exclusion of all else. In this moment, I could die, with […]